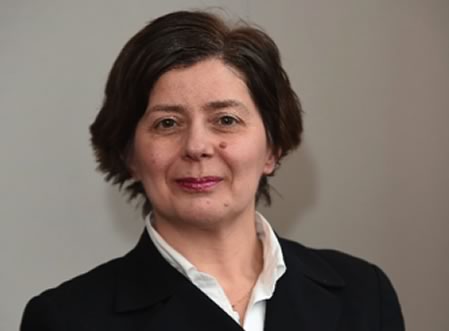 In September 2014, the Association of Business Schools (ABS) conducted its second annual survey on leadership amongst deans. Results of the first survey are discussed by Davies (2013). The purpose of the survey was to discover how deans have been selected, their reporting structure, pay increases at the recruitment stage. It also asked deans how they allocate their attention and what they would they prefer to do with their time.

The survey explored the extent to which there was a full match between the skills emphasized at the job interview and those subsequently used in the job and how deans’ performance can be supported. The ABS also wanted to explore how it can help current and next generation business school deans. In the survey, 115 deans were contacted via an electronic questionnaire from which 35 replied. This represents a 30% response rate.
The results show that most deans who responded had been in the post for less than two years and were internally appointed. Most reported there were no major gaps between skills and behavior expected at interview stage and later in the post. Deans said they enjoy experimenting and facilitating change and would be more satisfied if they could act with greater freedom from the central university. 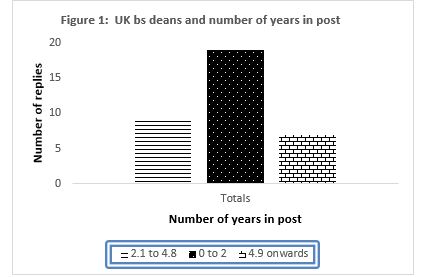 Deans: Their level of experience, reporting, and pay rise on appointment
Figure 1 shows that most of the respondents had not held a deanship before and were relatively new to the post of dean: 19 out of 35 had been in the post for less than two years.

Of the 35 deans who responded, 54.8% reported that there was a deputy dean; 66% of respondents stated that they reported directly to a vice-chancellor, deputy vice chancellor or pro-vice chancellor. The majority of the deans interviewed did not know if there had been a pay increase when they were recruited for the post. Of the 10 respondents who provided a figure for a pay rise, six stated that it was in the range of 1 to 20%. Only three respondents had obtained a pay increase of over 35%.

What would make the role more attractive?
The majority of respondents identified the following issues, in order of priority: (1) greater freedom from the centre, (2) research support, (3) better salary, and (4) higher status as a pro-vice-chancellor.

How do deans spend their time and what would they prefer to do?
Deans spent most of their time, first, on ‘experimenting and facilitating change’, by which they meant undertaking a range of activities such as restructuring programmes and processes, introducing new work load models to developing links with local business and other organisations. Secondly, they said their spent their time on reflecting and synthesising information. The respondents in the sample reported that they spent least time on managing performance.

The majority of respondents prefer to spend their time experimenting and facilitating change.

Gaps between skills and behaviour emphasized at interview and found subsequently to be important
Most respondents did not find any substantial gaps. Two respondents noted that at interview stage leadership, motivation, and the ability to raise non-exchequer income were emphasized. Subsequently, they realised that the most important skills were people management, an ability to be decisive and a willingness to take risks. One respondent explained the key characteristics of a dean: ‘Understanding capacity, readiness to think differently and coach, the ability to inspire as well as encourage and provide clarity in what is expected and why, a very thick skin.’

Gaps between the expectations given in the job description and the actual mandate
Six respondents did not find any gaps between the going in and actual mandates. Five mentioned they wanted greater decentralisation of decision-making. Some specific individual answers were given that related to low morale in the faculty, poor financial performance, lack of engagement from higher level of the institution, the inability to undertake university-wide activities and not being able to spend more time on operational issues.

Building capacity for current and future deans
Answers to the question of how ABS could build capacity to support current and the next generation of business schools deans included: more data analysis, benchmark school operations, external data, the ABS/EFMD International Deans’ programme, and provide experience in managing commercial organisations.

Conclusion
This survey contributes to our understanding of the crucial role that deans play in shaping business schools’ strategies. It demonstrates that deans are ambitious and many desire greater autonomy from the centre. The results demonstrate the Association of Business Schools’ role in contributing to capacity building for current, newly appointed and prospective deans.

The Association of Business Schools will continue to conduct this survey annually.

Bibiliography
Davies, J. (2013) ‘Revitalising the business school leadership pipeline: How will we source future deans?’ In ABS, Is it Possible to Balance Student Demands with Business Needs? The Association of Business Schools: London, pp. 81―94.

Reflections on the role of the business school dean
This report provides insights into the motivations, expectations, and challenges of university-based business school…
Leadership