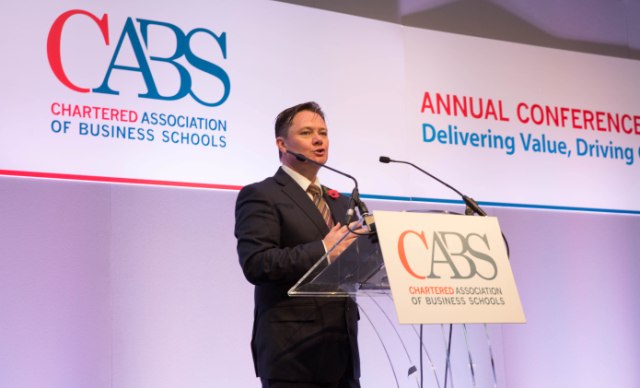 The government is guilty of “utter folly” by including international students in net migration targets and change can come only from David Cameron, according to the chair of the Business, Innovation and Skills Select Committee.

Iain Wright, Labour MP for Hartlepool, told a conference that “no one thinks that it’s sensible” and the issue was one that needed to go “all the way to the top, Number 10”.

Mr Wright made the comments in response to a question from Anne Kiem, chief executive of the Chartered Association of Business Schools (CABS), after his keynote speech at the association’s annual conference.

During his speech, Mr Wright mentioned four aspects of the conference that he said would be the focus of future inquiries by his select committee, including productivity and international students.

“It seems to me to be absolute madness to have a system whereby we educate foreign students in business and management to the highest standards anywhere in the world, only for them to leave this country before they contribute to the UK economy and apply those skills to the betterment of our competitiveness,” he said. “Why on earth do we allow skills learned in this country to quickly and directly benefit other economies’ productivity?

“Other countries recognise the entrepreneurial strengths of postgraduate students, and countries like the US, Canada and Germany are actively encouraging those talented business leaders of the future, those entrepreneurs of the 21st century, to settle in their countries and set up businesses there.”

Of the £7 billion that international students from outside the European Union were said to bring into the economy by a British Future and Universities UK report published in 2014, approximately £2 billion was attributable to business schools, according to CABS figures.

Mr Wright said the “entrenched” views of the Home Office on immigration were contributing to “undermining the British status throughout the world [and the ability] to attract talented foreign students” for UK business schools.

Mr Wright also expanded on his concerns around the teaching excellence framework, particularly the likelihood that institutions with a good TEF rating would be allowed to increase tuition fees. He said the government “announces things without any clue about how it’s supposed to deliver it”.