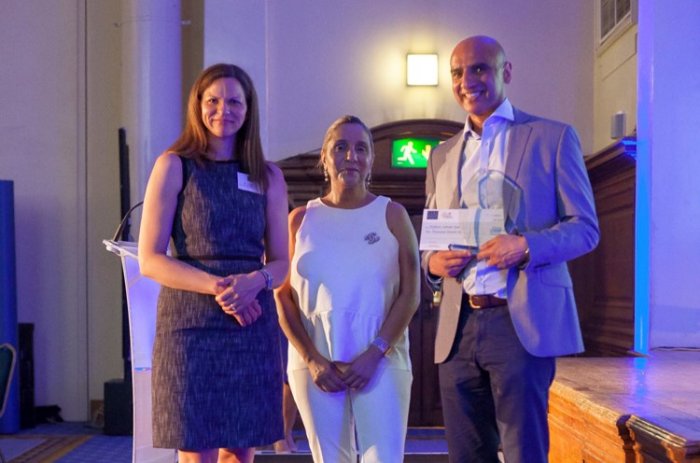 The Economic and Social Research Council (ESRC) has recognised the ground-breaking impact of a leading Birmingham Business School project, by awarding the co-directors an award as part of the 2017 ESRC Celebrating Impact Prize.

Professor Monder Ram and Professor Kiran Trehan were announced as winners of the £10,000 award for Outstanding Impact in Business and Enterprise on Wednesday 21 June, for their work with the Enterprise and Diversity Alliance (EDA). The network, which was launched to promote ethnic minority entrepreneurship, has helped hundreds of ethnic minority businesses gain access to finance, new markets, mentoring and business support, as well as raising awareness of the £25-£32 billion contribution these firms make to the UK economy every year.

“Minority entrepreneurs are often excluded from important networks – like banks, mentors and gatekeepers to large organisations,” explains Professor Monder Ram. “This relegates their businesses to the margins.”

The EDA has a simple ambition – to lift these barriers and make diversity and enterprise everyone’s business.  “The contribution of ethnic minority and migrant communities to UK plc remains underappreciated,” says Professor Ram. “Such groups are amongst the most entrepreneurial – yet they struggle for recognition.”

Backed by the British Bankers’ Association (BBA), policymakers and professional bodies including Association of Chartered Certified Accountants (ACCA) and the Equality and Human Rights Commission (EHRC), the EDA has worked to share academic and practical knowledge, develop closer relationships between minority businesses and the corporate sector, and provide direct support including access to finance, human resources expertise, marketing and IT support and mentoring.

Partnerships with banks including Barclays and Nat West have helped hundreds of ethnic minority and women-owned businesses grow thanks to bespoke financial advice and mentoring.  More than 30 workshops on how to gain access to finance and markets held in Birmingham between 2011 and 2016 have raised awareness of the support available and helped dispel the myth that bank financing is inaccessible.

The practical support of the EDA is invaluable, says Professor Ram, since many of the organisations and agencies that previously supported minority businesses have ceased to operate due to austerity cutbacks. “Currently, no other nationally-recognised resource is promoting good practice when it comes to diversity and enterprise,” he says. “We are an imaginative attempt to fill this void, working with the private sector on an agenda often associated with public sector agencies.”

Research and awareness are also key EDA objectives. Professor Ram initiated an annual Ethnic Minority Business conference in 1998. Now in its 21st year, this event is recognised internationally for networking and disseminating policy and research.

EDA also had success influencing policy makers at the local level via Local Enterprise Partnerships and nationally and internationally, too. An influential UK government report (Burt Report 2015) on ‘inclusive business support’ adopted many of the EDA’s recommendations on engaging with minority enterprise. The EDA was also highlighted by the European Commission in a 2016 guide to promoting on good practice in supporting migrant entrepreneurship.

Professor Glyn Watson, Dean of the Birmingham Business School, said, “We are delighted that Professors Ram and Trehan have received this award from the ESRC. At Birmingham, we are proud not only of our pioneering research, but also the impact this has on the daily life of our community. I look forward to seeing the EDA continue its success.”

Now in its fifth year, the ESRC Celebrating Impact Prize 2017 recognises and rewards the successes of ESRC-funded researchers who have achieved, or are currently achieving, outstanding economic and societal impacts. In awarding the prize for Outstanding Impact in Business and Enterprise, the judging panel described Professor Ram and Professor Trehan’s achievements as ‘impressive –particularly the buy-in they had achieved with both ethnic businesses, the British Bankers Association, specific banks and other organisations’.

View a video produced by the ESRC highlighting the impact of the Enterprise and Diversity Alliance: