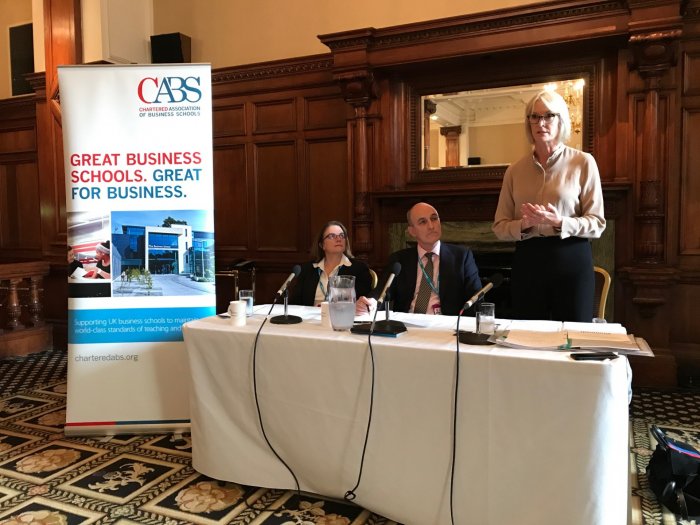 I attended the Conservative Party Conference and notice the increased talk about the Industrial Strategy White Paper, which it seems will be published soon. There will be a particular focus on how to support companies that are still running after three years of starting up, and employing people. A very large percentage, approximately 75% of start-ups are sole traders. There are suggestions about awarding a “City of Entrepreneurialism” similar to “City of Culture” in order to raise the profile of entrepreneurship around the UK.

At the conference I spoke at a fringe event on SMEs and the Scale-up Challenge (pictured), along with Mark Farrar, Chief Executive of the AAT, and Margot James MP, Minister for Small Business, Consumers and Corporate Responsibility. There is clearly knowledge and support for the role of business schools, and especially those with the Small Business Charter, across Government and we might expect a mention in the White Paper. What that might say, I don’t yet know.

Since the last update I have also met with civil servants from BEIS, and we hope soon to have a representative on the SBC Management Board. This will hopefully bring greater connection between what the SBC is doing and what the Government is hoping to achieve.

In other areas we have met with representatives from Innovate UK, the Innovation Caucus, the British Council, DfE, FCO, and others on various issues mostly around the link with businesses (large and small), and international students. I am optimistic that with the MAC review we may be seeing the end of international students being included in net migration figures. There are still some MPs who stick with the Prime Minister’s line on this, claiming that they are not in a position to remove them because the OECD sets the criteria for migration and the ONS will not budge. This, of course, misses the point that it is the Government’s choice to include them in their target figure for net migration, however, as I said, I remain optimistic that this situation may soon change.

I was a speaker at the AESIS conference in Cardiff, talking about how social sciences and humanities faculties can engage with business. We co-produced, with ESRC and British Academy, a meeting of the learned societies trying to build a way towards greater connection between academia and business.

I also attended the Higher Education Commission’s launch in Portcullis House of their report on “One size won’t fit all: the challenges facing the Office for Students”.