Increasing gender diversity in the boardroom by influencing national policy 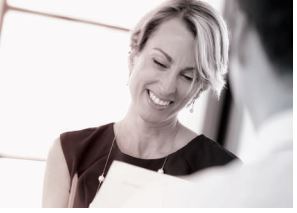 The International Centre for Women Leaders at Cranfield School of Management is committed to helping organisations to develop the next generation of leaders from the widest possible pool of talent. The Centre is unique in focusing its research, management development and writing on gender diversity at leadership level. Our Female FTSE work is endorsed at the highest level of government. It is widely recognised that there is a gender imbalance at senior management/leadership level. The Centre aims first to understand the issues facing senior women managers, and second the impact of organisational and personal factors on women’s managerial careers. Research findings then inform the Centre’s management development activities.

Our research highlights the business case for women on boards, as well as seeking a better understanding of the reasons for lack of progress. We work closely with politicians and organisations such as FTSE-listed companies and leading professional service firms, the Department for Business, Innovation & Skills, Government Equalities Office, Equality & Human Commission, Department for Trade & Industry, Institute of Directors, and Opportunity Now. We participate actively in a “think-tank” of women-in leadership professors and practitioners around the world.

Our research is distinctive in three key respects:

Since 1999, our annual Female FTSE benchmarking report has provided a regular measure of the number of women executive directors on the corporate boards of the UK’s top 100 companies.

Sponsored by UK Government and industry and launched by a Government minister, The Female FTSE Index attracts considerable press attention in the UK and internationally. The credibility and authority of the report is widely recognised by leading companies (e.g. PriceWaterhouseCoopers, Ernst & Young, Barclays, Lloyds Banking Group) and governments internationally (e.g. Australia, New Zealand), and provides the data for the UK Office of National Statistics’ Women on Boards figures. The study was hosted at the Chancellor of the Exchequer’s offices at No. 11 Downing Street in 2004. Reports are available from 2001 onwards. The Index is incorporated in the Reports

The most significant impact of the Female FTSE research has been through extensive contribution to the Davies Report in 2011, which recommended diversity targets of 25% by 2015 and 30% by 2020. Consequently, the proportion of female board directors on FTSE 100 companies increased from 12.6% in 2010 to 17.4% in 2012. Since the Davies Report recommendations, the Centre has also produced interim reports. The latest Women on Boards progress report (November 2014), reveals significant progress towards the Davies targets, with the proportion of female board members in the FTSE 100 having reached 22.8%. 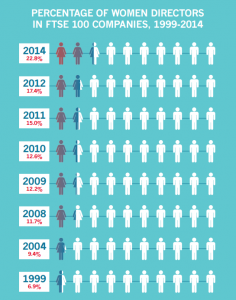