If there is one issue where the opinions of students, business schools and policymakers converge, that is the importance of integrating employability into the curriculum and the student experience. A survey conducted by the ABS shows that UK business schools are rapidly responding to this challenge, investing more resources on linking students with employers, preparing them for the job market and giving them the opportunity to take internships in the UK and overseas.

Sandwich year placements the best option for students and employers according to careers officers, but students reluctant to take them

Participants were asked what type of employment opportunities undergraduate students had in 2012-2013 as part of their programmes or with the support of their institution. The vast majority (nine out of ten) of responding institutions reported that they provided voluntary work opportunities. 81% offered sandwich year placements of 12 months or more, while at three out of four responding business schools took internships and work placements of 4 weeks to 6 months and shorter than 4 weeks. Work placements between 6 and 12 months were less popular, with two out of three respondents reporting that they offered this opportunity.

Asked which of the above schemes works better for students and employers, 37 % of respondents picked sandwich year placements, citing reasons such as the opportunity they give to employers to get more value from the student and the fact that students have the chance to develop a larger range of employability skills, particularly at larger businesses that have more resources and are willing to train students for a whole year. Interestingly, it was noted that students are not fond of these placements as they prefer shorter internships, especially in the summer. 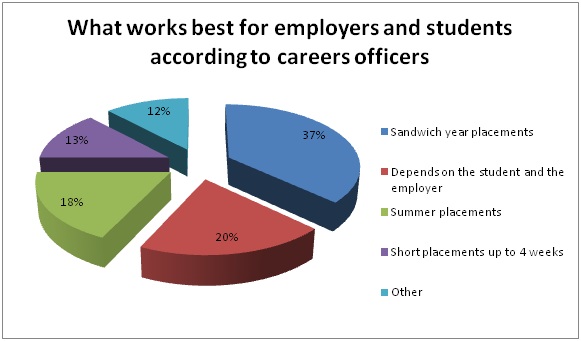 On average, 43% of undergraduate students at respondent institutions took part in one of the aforementioned employment schemes in 2012-2013, while 30% of these students stayed with the employer after the end of the scheme. One out of four undergraduate students took a sandwich year placement at institutions that offered this option, with the average fee for sandwich years standing at £1,078.

As for networking opportunities with employers, nearly all respondents reported that they organised guest lectures and career fairs for their students, while four out of five provided mentoring services and visits to employers. Around one out of two responding institutions offered work shadowing opportunities. 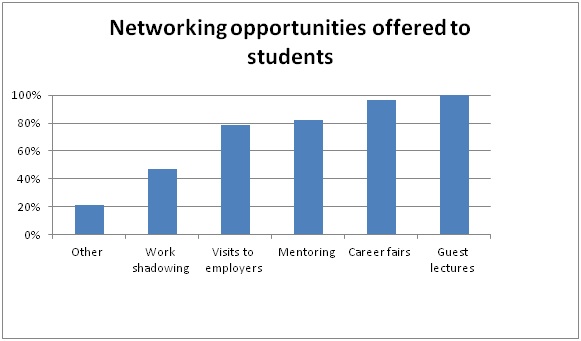 Asked which of the above networking events works better for students and employers, visits to employers, careers fairs and guest lectures were identified as the most useful ones, although many respondents suggested that a mixture is ideal. One respondent noted that visits to employers is 'an excellent way to help students understand the culture and work environment in a particular company', while another remarked that 'guest lectures, panel events, visits to employers work well for a more personal insightful interaction, and business games / case studies for a more educational interactive experience'.

UK Business schools are increasingly preparing their graduates for a globalised job market where international experience can make all the difference: 10% of undergraduate students at respondent institutions spent some time abroad as part of their studies in 2012-2013. Moreover, 13% of these students took a placement/internship abroad as a part of their course or with the support of the institution.

As for the impact on international experience on graduate employability, nearly all respondents agreed that an internship abroad can make a student stand out from the crowd. For example, one respondent said that students who took an internship in the US created a 'Business Network student society' and another one said that they ‘believe in internationalisation not only of the curriculum but also of individual students’.

Asked to rate the impact of international placements and internships on student employability on a scale of 1 to 10, 1 being 'very negative' and 10 'very positive, respondents gave an average ranking of 8.4 (very positive), citing reasons such as the opportunity given to students to boost their confidence, broader their horizons, increase their understanding of business and of global markets, enhance their understanding of competition from other students and being able to stand out from the crowd.

Finally, asked about the contribution of international branch campuses, one out of three respondents reported that they have a branch campus abroad, although only a couple of institutions are actively using these campuses (both in China) to provide overseas work experience to students from the home institution. Interestingly, one respondent noted that they wanted to organise a sandwich placement via their operation in China last year, but that proved impossible due to Chinese visa restrictions.

The main findings of the survey were presented in the ‘21st Century Leaders: Building practice into the curriculum to boost employability’ report, launched this June by the ABS, CMI and QAA. The report highlights a gap in the collaboration between employers and business schools, while presenting case studies of successful business school-employer engagement and providing recommendations for a closer relationship between the two. The survey focused on employment and networking opportunities UK business schools provided to their undergraduate students in the academic year 2012-2013,.  One out of three ABS members answered an online questionnaire from April to May 2014. The vast majority of respondents consisted of employability and careers officers at UK business schools that are members of the ABS.